How many Americans over the age of 50, like me, can say they learned yoga from their grandmother? She wasn’t Indian, or Hindu, or Buddhist. Born in 1913, she was raised as a Presbyterian in rural Tennessee. She came of age in the Great Depression. She worked in the same courthouse as Sheriff Buford Pusser (yes, the one from “Walking Tall”). 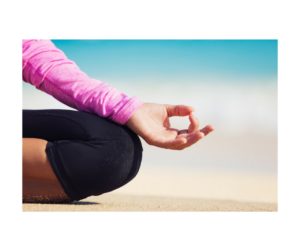 She was an athlete. At 5′ 1″, she played the side center position (which no longer exists) on the high school’s basketball team, and received a scholarship to Lambuth College. She was a fierce swimmer, and taught a couple generations of Tennessee townfolks to swim. Then I, the first grandchild, came along in 1965. My parents were living near Tampa, Florida, so she and my grandfather left their small Tennessee hometown. She soon found a local “spa” (what gyms for women were called back then) to swim and attend exercise classes. Around 1973, a yogi started teaching there. At about 60 years of age, she became hooked on health food and headstands.

As an 8-year-old, although her headstands were cool, I was not enthusiastic. Before the yogi entered her life, we got weekly trips to 7-11 to pick out any candy we wanted, and endless cartoons at their apartment on Saturday mornings. Suddenly there were carob bars, spoonfuls of wheat germ, and mandatory morning Salutes-to-the-sun. Then came the headstands, “Plank,” “Cobra,” and seemingly impossible poses. When we got a sore throat, there was the “Lion.”  I soon learned if I had a bodily complaint, there would be a yoga lesson forthcoming. So I didn’t complain too much.

Looking back now, I am quite sure she was aware of the legacy she was creating. Despite my childhood protests and a young adult period of yoga-resistant dormancy, surely she knew one day I would be grateful. Indeed, with help from occasional classes, I have a morning yoga practice at home that is a cornerstone of my physical and mental wellbeing. When I lift my arms to salute the sun, I repeat a movement, reinforce a discipline, inhale a breath that has been part of me for over 40 years now. It’s an anchor to who I have always been. With every passing year, my gratitude for her gift multiplies.

In the financial planning business, the topic of one’s “legacy” often comes up in the context of how much and what kind of financial gift to leave to heirs. My grandmother never had a lot of money. But I wouldn’t trade my yoga practice for any other kind of gift from her.

This site uses Akismet to reduce spam. Learn how your comment data is processed.

Sign up for our award-winning monthly e-letter, "The View From The Porch."