For most of my career, I thought my job was to advise people how not to run out of money. After all, that was at the heart of the main questions everyone asks. “Am I on track for retirement?” “Do I have enough?” Answers to these questions depend on technical assumptions. My credentials and continuing education emphasize learning as much as I can about these. 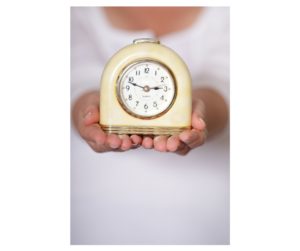 What I have had to learn is how to advise people not to run out of time. And I don’t mean that I need a medical degree.

We all tend to be more worried about running out of money than running out of time. Nearly everyone who has no serious health issues, myself included, believes they will live longer than average. After all, a married couple who both make it to their 65th birthdays has a 15% chance that one of them will make it to their 100th. That sounds pretty high.

But not everyone can or will live longer than average. By definition, 50% will not.

Did you know the average age of widowhood is estimated to be 57? I just attended a funeral for a previously healthy 51-year-old colleague who contracted lung cancer – a non-smoker, marathon runner, highly educated, wonderful husband and terrific father to two little girls. Last year, a similar story occurred for a prominent local attorney I knew, age 55.

Sometimes, time is shorter than we think.

What does this have to do with sticking to my supposed job?

The day before my colleague’s memorial service, I met with a couple in their late 50s considering retirement at age 65. Neither one especially like their job, nor where they live. They have their dream retirement life outlined on a spreadsheet, in various cities with a climate they like, amenities, and activities they enjoy. Our plan showed that if they worked until 65, with 99% certainty, they would clearly have enough to make their dream happen. But that means working several more years at less-than-ideal jobs in a less-than-ideal city.

I asked them if there was any goal they might want to “play” with, to see how their projected success would change under a different scenario. She chose to play with their retirement ages. We ran the figures retiring at 60 instead of 65. Instead of a 99% probability of success, the odds fell to 88%. They were disappointed, and said to move the retirement age back.

With my friend’s recent demise in mind, though, I reminded them that the 88%-certainty-scenario came from assuming a long life. If life for one of them turns out to be much shorter, I asked, how would they feel about the decision to work 5 more years for a 99% certainty based on a wrong (in hindsight) assumption? Might they regret not “going for it” sooner? In the end, after some discussion, they still wanted to keep working.

As I gain life experience, my job gets harder. It’s fairly easy to tell someone all the sacrifices and changes they need to make to be absolutely certain they will have enough money. What’s harder is to balance two worthwhile, but often conflicting, goals: making sure the money doesn’t run out, and facing the fact that time does.

When She Is Better Off Than He Is

The ABCs of Behavioral Economics