For several years before I started in business, I had an annual negative-self-talk ritual. It usually happened near Christmastime.

“Another Christmas has come, and I still haven’t started that business. Maybe this will be the year.” For the first few years this happened, I told myself it “wasn’t time.” After two or three more, I realized there was never going to be the “right time.” I would continue to justify my “need” for my corporate salary and benefits, until I changed my mindset.

I would like to say that was the Christmas where the heavens opened, angels sang, a masculine voice boomed something about my destiny, and the next day I walked into my boss’s office with my resignation letter. 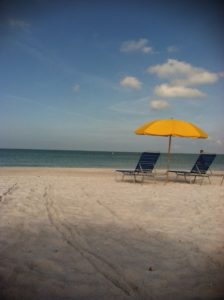 But no such thing happened that Christmas. What did happen was a metaphorical lightning bolt on my next summer vacation. I was sitting next to my sister on the beach (which to me might as well be heaven). There were no angels; only cackling seagulls. And there was no masculine booming voice, only my sister, saying out loud what I needed to hear.

“I don’t know when you’re going to stop talking about this business, and just DO IT.”

The magnitude of her right-ness was hard to take, but I didn’t question it. Two months later, my potential first client showed up. Two weeks after that, I resigned from a 20-year corporate career.

That was 10 years ago. I am delighted to say 2016 was my best year ever, in more ways than just business, but much of it happened because of that decision in 2006. There is no doubt I could have quit sooner. Today I would be telling my 2003, -4. and -5 selves, “It will not only be ok, it will be fantastic. Time is finite. Don’t wait.”

Nowadays I have the honor of listening to others share their long-held dreams of starting something new – businesses, careers, retirements, families, and even a mission. Like me, many think it’s not the “right time.” As a financial professional, if I stuck strictly to the numbers, most of the time I’d simply agree. Yep, we can always use the money we know is coming more than the money we don’t.

Yet because I know that spirit of longing well, instead I ask, “What would you be willing to give up in order to make that happen? What if life didn’t look so bad after your decision? What’s the worst that could result? And what could you do then?”

And finally, “But what if you succeeded beyond your wildest expectations?” Sometimes we need an outside party to help see both sides of the question.

Now, how about you? What would you like to start new? Will this be your year?

Are You Whistling While You Work?